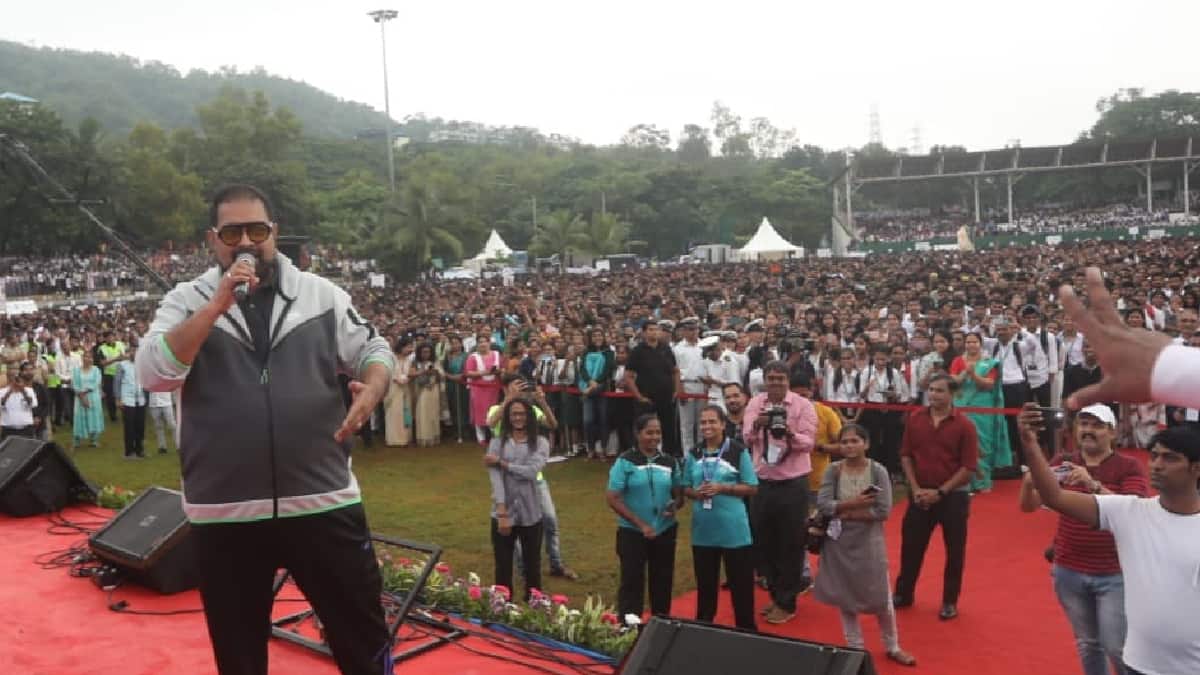 Navi Mumbai: Under “Indian Swachhta League” more than 41 thousand students and youth participated in this anti-garbage campaign along with captain of “Navi Mumbai Eco Knights” team Padmashri Shankar Mahadevan at Rajiv Gandhi Sports Complex in Belapur. However, the human chain planning organized along the Palm Beach Road failed. Under the ‘Swachh Amrit Mahotsav’ announced by the Urban Development Department of the Central Government from 17th September to 2nd October, the program was organized by the ‘Indian Swachhta League’ under the tagline “Youth vs. Garbage”. was done. In this, more than 53 thousand youths took part in the vigil for a clean Navi Mumbai. 41 thousand students showed their presence in Rajiv Gandhi Maidan and 12 thousand students showed their presence on the BIG LED screen installed in the auditorium at CIDCO Exhibition Center in Vashi.

The new cleanliness jingle was unveiled by Navi Mumbai Eco Knights team captain Shankar Mahadevan at Rajiv Gandhi Maidan. The cleanliness jingle and some other popular songs were performed along with the youth and students present. While the program was going on at Rajiv Gandhi Maidan, there was sporadic rain after 9.45 am. Despite the rains, students and youths enthusiastically participated in the cleanliness drive without any interruption in the program.

Politicians in Navi Mumbai are not attracted by the municipality

Administrative rule has been in force in Navi Mumbai Municipal Corporation for the last two and a half years. However, politicians and former corporators are playing tricks in various programs of the municipal corporation. Today, it came again in the Swachh Indian Swachhta League program at Rajiv Gandhi Maidan in Nerul. The former corporator was present on the platform of this Indian Swachhta League program. When the administrative rule was in effect in the municipal corporation, such discussions had arisen as to how these politicians were present on the platform in the municipal program.

For the first time through the Navi Mumbai Municipal Corporation through the Indian Swachhta League: The name of Navi Mumbai was going to reach every corner of the country by hoisting the tricolor of India for a distance of 7 km through a human chain. But due to zero planning, this program did not start in time. Also, a large number of citizens of the city were expected to attend this event. But actually less citizens showed their presence. Therefore, the Navi Mumbai Municipal Corporation formed a human chain carrying the tricolor with the support of municipal employees, security personnel and children, but the distance of seven km could not be completed. At the same time, drinking water facility was not available for the employees and children present here. Also, children were getting wet due to sudden rain. The Navi Mumbai Municipal Corporation had circulated information about the human chain with great fanfare. Accordingly, the municipal corporation may have planned this program, but in reality the planning of the human chain was mistaken. Due to this, some of the present citizens are expressing displeasure.

In the general meeting of the Navi Mumbai Municipal Corporation, a resolution was passed that Mini Seashore has been mentioned as Juhu Chowpatty in the year 2015. However, Mini Seashore is still being mentioned in the records of Navi Mumbai Municipal Corporation as well as various architectural departments. Therefore, this displeasure is being expressed by the citizens.